Since the glamping holiday industry developed, the term Yurt has become an interchangeable term in Europe for a round, framed structure. Originally in Mongolian these structures were know as Gers which mean 'Home'. There is evidence that Yurts were in use 600 BC. Yurts have evolved since the time of Genghis Khan.

The walls of authentic Mongolian Yurts are made of a lattice wooden framework. This lattice framework is the beginning of an ingenious design. The yurt has a doorframe, roof poles & a crown in the roof which all interlink. The ingenuity of the yurt's design comes into its own as linings & exterior canvas place weight on the crown, passing pressure through the roof poles which act as spokes spreading the the weight and pressure of the structure out to many points along the lattice walls. This in turn gives the yurt stability & rigidity. Luckily our modern Yurts have pole frames as authentic wooden ones, beautiful as they may be, are prone to breaking, woodworm and weathering.

The crown of the authentic traditional Yurt is steeped in tradition. Naturally, different parts of a Yurt would be replaced over time; the crown however, would be kept within families, being passed down from father to son when a father died. It is said that the amount of smoke marks on the crown of a family's Yurt or Ger showed their pedigree.

Because Yurts were the traditional accommodation of herders they were specifically designed to be quickly dismantled, moved & rebuilt in another place; in order to provide shelter as the herder followed his flock.  A nomadic herder could dismantle a traditional yurt in less than an hour then be on his way to the next grazing spot.

To mark their passage into married life together, families would build a new Yurt for the newlyweds .

Whilst a Yurt may look small outside, do not be deceived, our Yurts easily accommodate four people with a double bed and two single futon sofa beds.

Traditionally a yurt would be heated by a fire in the centre with the smoke passing through the holes in the rose. Whilst this is no longer considered safe for holidays we make sure you can roast marshmallows with a fire pit outside, and gas "stove" heaters are available on request during the chillier months.

A lot has changed since the original Yurts were used to roam entire regions, today our glamping Yurts are made here in Britain ensuring they are made to withstand our country's characteristically changeable conditions.

Visit our Yurt glamping page for more information about our accommodation here in Somerset. 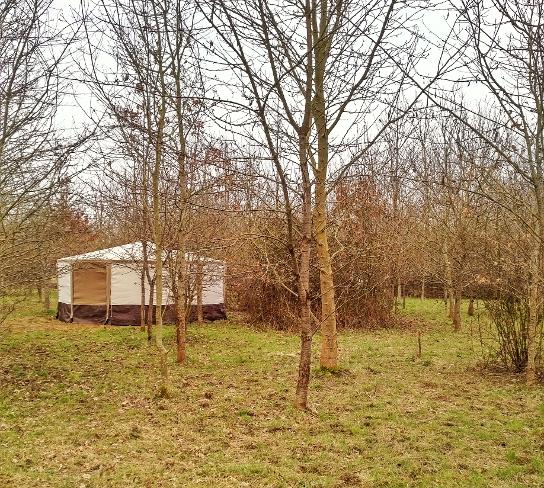 Yurts in Somerset at Woodland Escape

Woodland Escape provides the history of glamping Yurts in the UK as a free resource. Please feel free to cite our history pages and reference these in your own work & research.

Woodland Escape is the newest member of the Country Glamping Holidays stable who have provided glamping holidays for more than a decade. One of the longest & most experienced glamorous camping companies in the UK, CGH provides accommodation delivery, owns & operates sites, provides on site operations for landowners & provides consultancy. We are always happy speak to the media and researchers about the industry. Please feel free to contact us regarding any queries.
Contact CGH: countryglampingholidays.co.uk